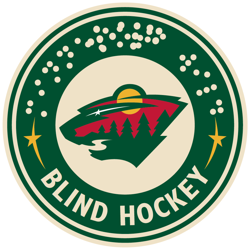 Blind Hockey is the same exhilarating, fast-paced sport as Ice Hockey with only one main difference – all of the players are legally blind.

Players’ levels of vision range from legally blind – approximately 10% vision or less – to totally blind. Blind Hockey is an excellent spectator sport as it is easily recognizable to the average hockey fan, with minimal rule adaptations to help with gameplay and player safety.

HERE'S HOW IT WORKS:

MISSION: Minnesota Wild Blind Hockey is dedicated to providing children and adults with vision impairments the opportunity to participate in ice hockey.  The program will focus on basic skating and hockey skills.  We strive to promote and emphasize the development of sportsmanship, team spirit, increased confidence, pride, and team unity.

HISTORY: Blind Hockey has been played in Canada since the early 1970’s. The sport was first played in the U.S. on October 18, 2014 with the first ever Blind Hockey Summit in Newburgh, NY. At this event local players and visiting Canadian players formed two teams and played two structured games, following a try-it session which introduced the sport to many new players. At the 2015 USA Hockey Disabled Hockey Festival in Buffalo, NY, blind Hockey was introduced to the rest of the Disabled Hockey Community.

Again, U.S. and Canadian players came together to form two teams and played a single exhibition game. Word has spread quickly about this new discipline of hockey, and players and programs have sprung up all over the country. The Blind Hockey Summit is now an annual USA Hockey sanctioned event which brings players and administrators together from across the country to play and grow the sport.

As one of the fastest growing segments of Disabled Hockey, blind hockey is a great opportunity for those individuals with vision impairment to be a part of the best sport in the world, ice hockey!

In 2018, Minnesota Hockey, in partnership with the Minnesota Wild, announced the launch of Minnesota's first-ever blind hockey program. The Minnesota Wild Blind Hockey will open registration for its inaugural season on September 1st and kick off the year with a try blind hockey event on Sunday, October 21st at HealthEast Sports Center in Woodbury, MN.

The program is open to players of all ages with visual impairments. Players must register online to participate and will be required to wear full equipment on the ice. A limited supply of equipment may be available for use.

Minnesota Wild Blind Hockey will host weekly ice sessions throughout the season with a focus on teaching basic skating and hockey skills.  The program will strive to promote and emphasize the development of sportsmanship, team spirit, increased confidence, pride, and team unity.

Coaches and Volunteers must complete the four steps below.

2) Choose your dates to volunteer

Teams looking to volunteer must complete the two steps below.

2. Complete the waiver (below) - Each player must sign and submit the waiver on the day of the event chosen to volunteer. If you've chosen to help more than once, only 1 waiver is needed.